Mandalas are so much fun to do. In this one are lots of zentangle patterns – can you spot them?

Soft blues and greens play against the coppery tones used in the structure of the mandala. Soft, yet not washed out with plenty of contrast betwixt the highlights and shadows. I’m actually really happy with the color palette I’ve used here, as well as some subtle texture patterns that may not be visible on this smaller, lower resolution image.

What I do like is the light, almost lacy feel to the outermost ring.

A lovely way to spend a few hours on a Monday morning. Indeed, I got so engrossed in this that I’ve not had breakfast yet and it’s gone midday!

Simply because sometimes drawing small is just what the soul needs.

The original drawing is about 3¼” x 4″ in size. I used 05 and 01 Sakura Pigma Micron pens in a Seawhite sketchbook. Background colour and colour added digitally.

Today I’ve been busy with administration, inking the illustration for the cover of my next book in the Creative Haven series, so my blog was pushed down the list of ‘to-dos’ a bit. But I’ve got here!

Then, I had the urge to create a little tangled, entangled drawing. So I did.

I cut up some Winsor and Newton Bristol Board into 4″ squares (approx. 10cm squares) and used some Uniball Unipin pens to do the drawing and shading.

I’m quite happy with the result. I may add some colour, perhaps with my Chameleon pens and pencils; I may need the sharp point of a pencil to get into some of the small spaces to add some shadow.

I do need to get out for a walk today. I’ve been letting myself stay in the safety of my home. Mind you, and I think that’s what I’ve needed this week as part of my self-care.

However, I now am feeling a lot less anxious than at the start of the week. So, it’s time to venture forth for more than just a quick trip out for vittles.

Maybe. I do need to have breakfast first. Oh, I’ve just seen the time. I need lunch first! 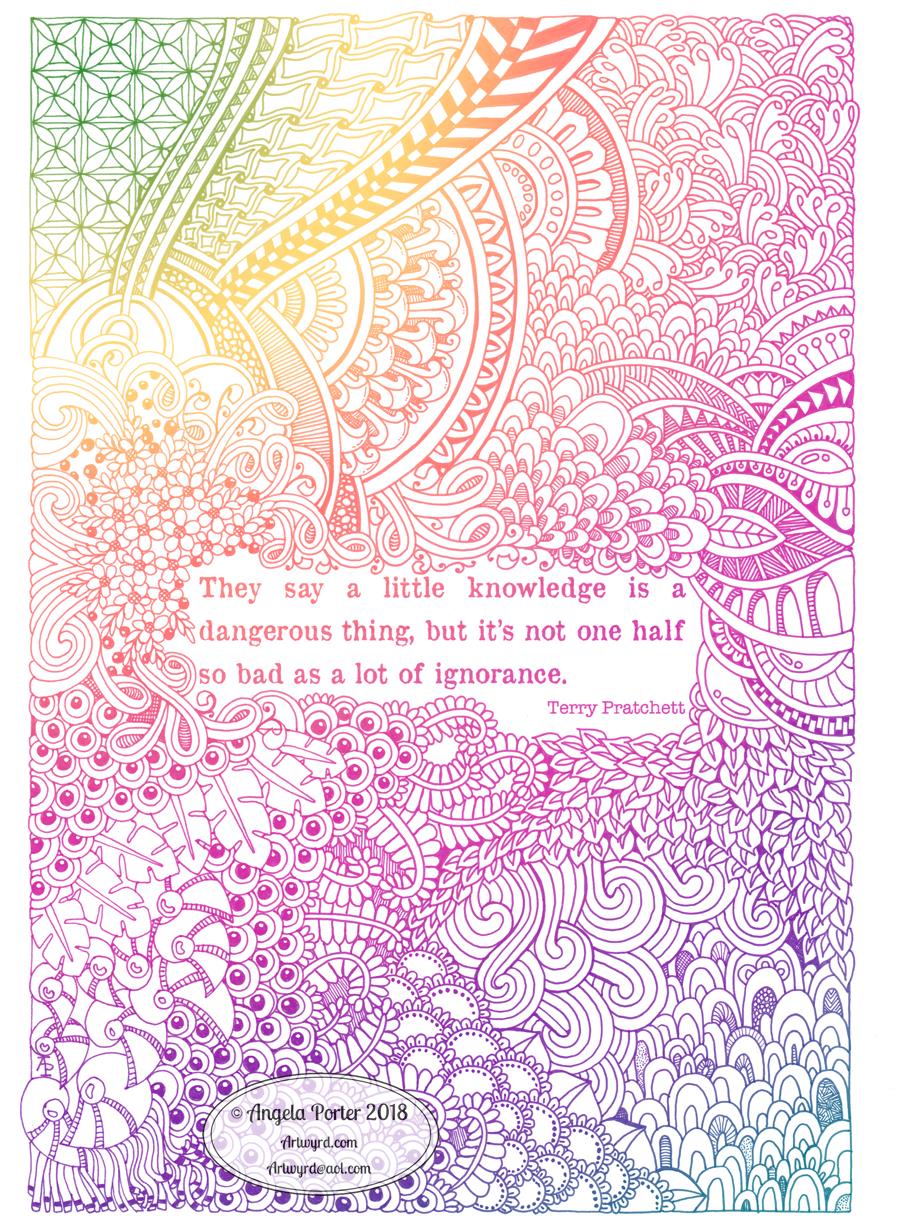 I am enjoying doing these quotes, as I’ve said before.

I enjoy the intricacy of the drawing/design/illustration.

Today is WIP over on the Angela Porter’s Coloring Book Fans facebook group – you’d be made very welcome if you pop over and join in! 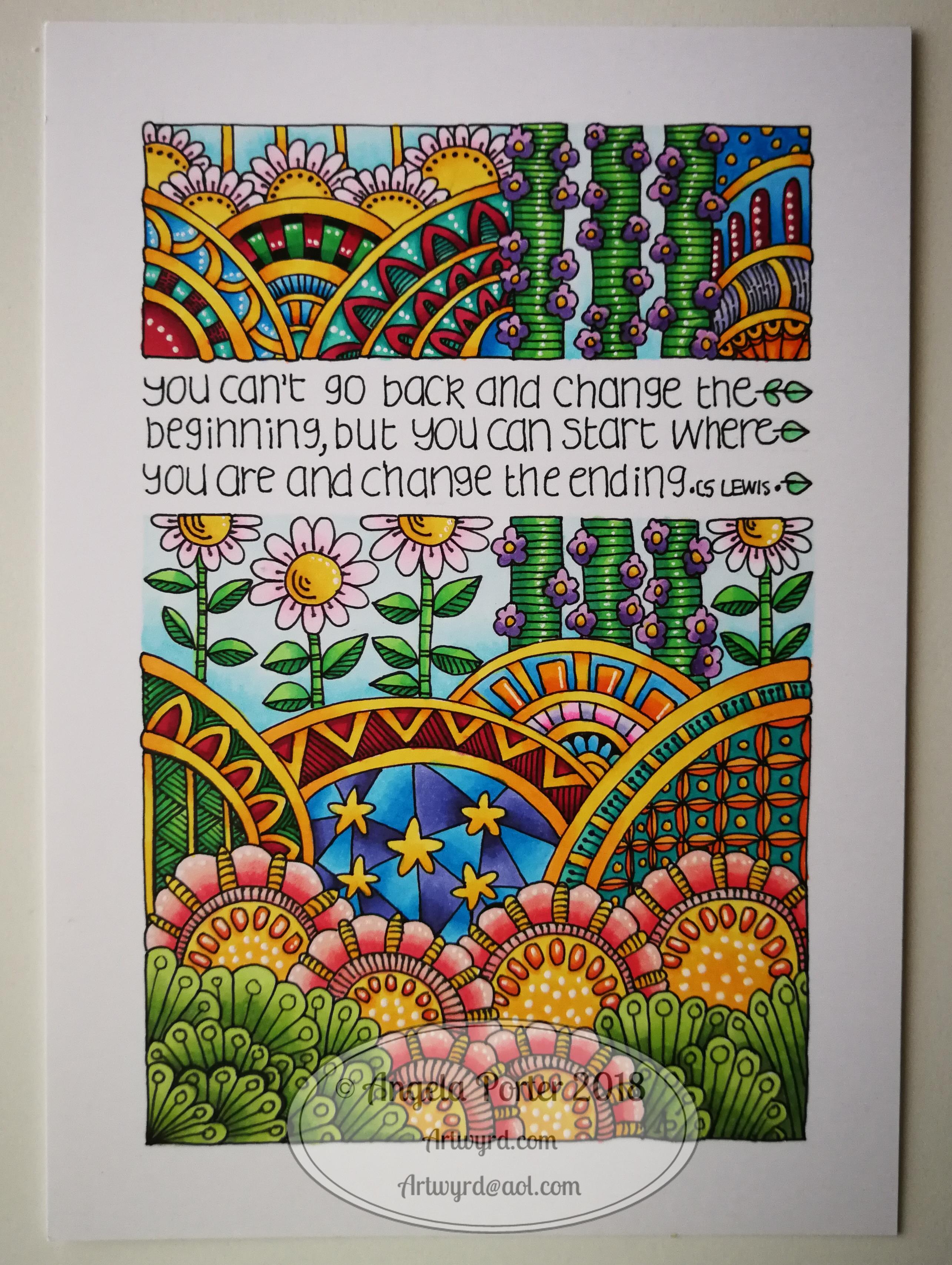 I’ve been playing around with hand lettering and design for a while now. From placing the words on curvy lines to straight lines. Trying having the word(s) sit above the drawing with white space above and using them to split the drawing, as in this case.

It has been a bit of an adventure, with some successes, some not quite so. With this one, though, I think I’ve found my kind of ‘style’ for it. I like the way the flowery ‘poles’ join the top and bottom part of the design. I really like the jewel-rich tones of reds and blues that I’ve used.

I like my quirky hand lettering. It may not be the best, it may not be the most precise or even. If I wanted that, then using something like Publisher or the text tool in Autodesk Sketchbook would or could work. Or I could select and move individual words, or even letters around, in Sketchbook. That, however, would remove the imprecision that gives the art a ‘human’ touch.

To create this, I used a Pentel Energel 0.5 pen to draw the design and do the hand lettering. My Copic Ciao’s were used to colour the image in, and I added white dots with white Sakura pens – Souffle and Gelly Roll 08, both of which worked well over the Copics.

I enjoyed using the Energel pen. The line is consistent in width and intensity, and my heavy hand doesn’t wreck the tip within a short space of time. I also tried out a Uniball Eye Needle point 05 pen for some of the fine details, but it didn’t seem to like writing over the paper that had been coloured with the Copics. It does, however, write smoothly on plain paper, whether that’s Bristol board or Heavy weight cartridge paper. The solvents in the Copics changes the surface structure of the paper; the Uniball Eye didn’t write smoothly on it, and it also bled into the paper, which it doesn’t do on un-Copic-coloured Bristol board.

A little drawing for today, including some iridescent paint.

Imagination is important. Einstein said, “Logic can take you from A to B. Imagination will take you everywhere.”

My art is often imaginative, nearly always intuitive, and this is an example of both.

A strange bouquet or a weird tree, with a wise quote above it. I really shouldn’t have continued to add elements to the drawing once I’d added the quote, but it is as the quote says, small steps in the right direction of learning. 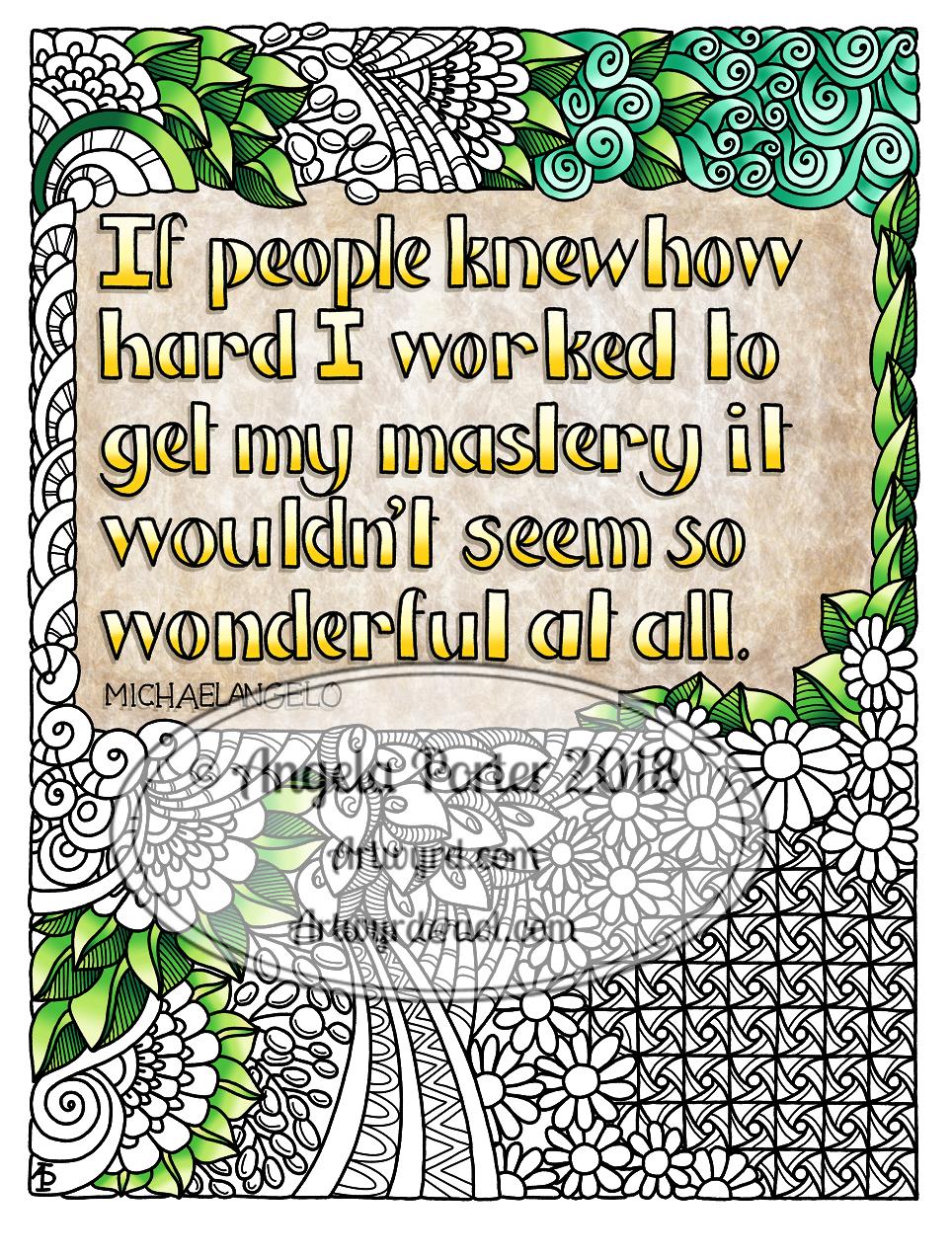 This is my current work in progress, with a little bit of wisdom thrown in.

I planned the lettering out on Rhodia dot grid paper before scanning it in. I then re-drew the letters digitally.

I did a blog post with tips for hand lettering  yesterday, but there’s also some in my upcoming book A Dangle A Day, available for pre-order.

I’ve started to add colour, though there’s quite a lot to do, including adding textures. It’s a pleasant way to spend time.

What I’m quite pleased with is the stone background behind the letters.  It’s not perfect, but I got my head around how I could achieve this.  Working in layers means I can do things I can’t do with traditional media, try as I might, but it involves working out how I can use layers to do different things as well as becoming aware of what I could use layers for.

Yes, I could watch and read tutorials, but there’s something satisfying about working out for yourself how to do things, and creating things in your own way.  That’s the sheer bloody-minded independence I have at times.

Perhaps I could learn quicker with tutorials, but I also know I can become quickly overloaded with information and instructions and ideas (something that frustrates me as before my two episodes of severe depression and anxiety I had no trouble at all…) so bit by bit I discover what I need to be able to do at any one time. Then practice using it until it’s easy to do and natural.

I do love how I can flip-flop between traditional media and digital work, as well as combining the two, whether it be a sketch that is then worked on digitally or using traditional media backgrounds to draw upon digitally. It also takes me a little bit out of my ‘comfort zone’ too, but in an enjoyable way.

Today’s entangled image.  Drawn using a Sakura Micron PN pen on bristol board.  A little less than A4 (Letter) in size.

Some quiet time practicing #handelettering and continuing with my alphabet.
My #sundayart #letteringpractice #letteringsketchbook #pendrawing #zentangle #zentangleinspiredart #abstractart
A small #zentangle inspired drawing was just what I needed to do this morning. Adding delicate colour and shadow with #Inktense went with the distressed background
I had a lot of fun creating this panel this morning.
It's #TemplateThursyay! This time, it's a #mandala for the #AngelaPortersColoringBookFans #FacebookGroup
#DrawWithMe - A leafy and berryful #tanglepattern
Angela Porter
Loading Comments...
%d bloggers like this: