This week, a little more than usual, my thoughts have been on peace.

Mother Theresa said, “I will never attend an anti-war rally. If you have a peace rally, invite me.” The essence of this is that if we want peace, our thoughts, words and actions need to be on peace. That resonates with me a great deal, and I did before I’d heard of this particular quote!

So, with peace on my mind, I’ve drawn not one but two colouring pages/colouring templates this week. They are available to Angela Porter’s Coloring Book Fans Facebook group members.

However, if anyone wishes to send me an email to Artwyrd at AOL dot com, I can send them to you.

I was born in the early 1960s and have a sister who is ten years older than me. I was, from my birth, surrounded by music and imagery of the hippy era. So, it’s natural that some of the symbols of that time can be seen in my drawings.

Art is my way of not just expressing my creativity but is a way to take my mind off worries and troubles and to focus on more positive thoughts. Any creative activity that you can lose yourself in, not being aware of your thoughts, brings a sense of peace and calm, relaxation and pleasure. Colouring has the same effect on the mind as mediation, something else that I do.

Both templates were drawn with fineliner pens on paper. Colours and coloured backgrounds have been added digitally using ClipStudio Paint.

It’s template Thursday! As it’s December, my templates will have wintry, themes, all with the emphasis on bringing light and colour into our lives during the last weeks of the year.

As I live in the Northern Hemisphere, we’re in the last few days of autumn. However, no matter where you live in the world, there are always starry night skies, and I suspect stars will feature a lot in the templates. Not just because I love stars, but because I’m working on Entangled Starry Skies.

This template is available to members of the Angela Porter’s Coloring Book fans facebook group.

The first day of a new month means I add a colouring template to the “Angela Porter’s Coloring Book Fans” Facebook group. I make the template an exclusive freebie for members of the group. The group is free to join. Why not pop over get access to this and all other group templates.

I drew the template on Winsor and Newton Bristol Board using a couple of Uniball Unipin pens. I scanned it in, cleaned up some smudges overruns.

As it’s September, my mind is on the changing seasons; we’re heading into autumn here in the UK. The rowan and hawthorn trees are laden with red berries already. The sycamore helicopters and ash keys are turning golden and are visible amongst the still-green foliage.

It is my favourite time of year. I love the comfortably warm days and the chilly nights. It’s a delight to snuggle down in bed with a warm body and a cool head. I sleep so much better too. Mind you, I think my weighted blanket is helping with that.

I love the change in the colour and quality of light – the golden hue delights me. I’m also looking forward to seeing the relatively rapid colour-changes that happen as the dull, dark greens of summer give way to the fiery conflagration of autumn.

So, my September template has autumnal motifs in it, though they’d work for any season no matter where you are in the world.

I will continue to add colour to this template throughout the month, hopefully. Then, at the close of September, I’ll show the finished coloured version.

I always look forward to seeing how different people colour the drawing. I love to see the different colours, media and techniques they use.

That’s right, there’s an annual day to celebrate coloring books and to indulge yourself in the relaxing, calming, stress-busting activity of coloring, no matter your age or gender!

As you can see if you browse this blog, I do a lot of art. Whether drawing, colouring, or other forms of creativity in art it really does relax, calm and soothe me when I need it.

And there are times when I really do need calming and relaxing. It’s no secret to anyone who has followed my blog for a while that I have complex PTSD (CPTSD) and I am slowly recovering from it with the help of EMDR therapy. On the days where I have low mood or anxiety or I’ve been startled into hyper-vigilance, art really helps to soothe my jarred emotions and calm me until the stress hormones leach from my body returning to their normal level for me. That is still an elevated level, but a level that has always been there in my life.

It’s not just me saying this. Research has shown that spending time colouring has a similar effect on the brain as mindfulness meditation.

One piece of research at the University of West England in Bristol has shown that colouring can reduce stress, boost creativity and increased mindfulness (being aware of what you are doing at that moment, not thinking about the future or past).

The benefits of colouring are listed in an article on the developing good habits blog.

If you like to draw your own designs to colour and are looking for something new and a little different, then you may like to take a look at my book ‘A Dangle A Day’. In the book I show you what dangles are, how to draw them and use them with hand lettered sentiments and monograms. They’re fun to draw, simple, and there are many ways to use them such as in bullet journals (BuJos), planners, journals, scrapbooks, greetingscards, note cards, bookmarks and more.

Also, I gift an exclusive template to the Angela Porter’s Coloring Book Fans facebook group at least once a month. They’re free to members and shouldn’t be available anywhere else, though intellectual theft isn’t unknown in the realms of the internet.

The image above is the August template for the facebook group. I coloured it digitally using gradient tools for some speed. It would take me weeks to do the way I’ve been creating digital art of late!

Here’s the tags you can use to connect with me on the social media platforms that I use: 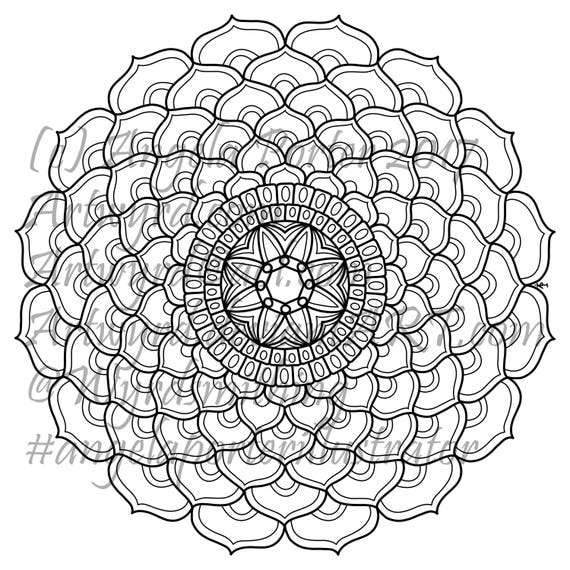 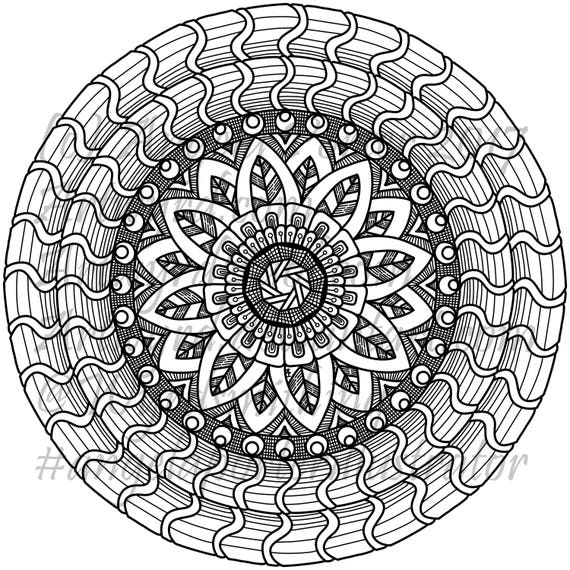 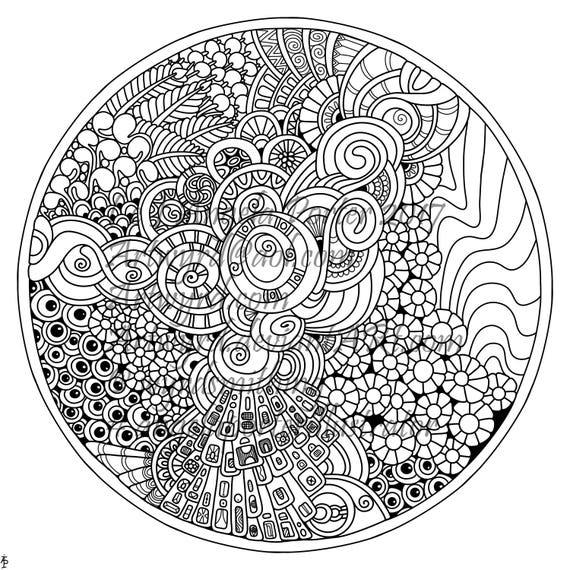 For each, there’s either a fully coloured, or partly coloured, version of the line art to see.  Yes, I’ve been using them to practice colouring in digitally.

I’ve also started work today on a new book for Dover, the theme for it being eerie.

I’ve started getting my head together around colouring templates for sale on my Etsy shop, Artwyrd, and this is my first design – Dragonfly Mandala.

As always, I love to see how people colour my designs in, and hope that people will share their finished works with me via social media!

First, the announcement!  I’m doing some coloring templates for the Colorist App, and my first book of ten pages – called DoodleWorlds – is now available for it!

Colorist is the only app that lets you color with exactly the same feel as coloring pencils! Relax on the couch and enjoy coloring a complex design, a vacation spot, or a crazy cartoon cat – tons of pages to choose from. Even color the same picture more than once, to see what else you can do with it. No need to worry about losing your coloring pencils in the couch anymore!

I have tried the Colorist app out, and here’s an honest review of it.

I had a quick look at the app before I agreed to do any design work for Faction Apps as I’d not want to have my artwork on any platform that I didn’t think was a good thing.

I’ve given it a test run using my Surface book and the Surface pen.  I haven’t tried it out in touch mode with my finger. You can see what I did in the image above, which is one of the free downloads as my own weren’t available at the time I did this test.

Here’s a close up of the section I coloured in.

There’s a large number of colours available in the palette, and the bar that appears beside the image retains the last eight colours you’ve used, which is really useful and makes colouring in areas you want in the same colours easy to do.  It also means it’s easy to use many colours to get a smooth colour gradation, something that you can’t do with other colouring apps I’ve seen.

There’s a slider bar with the tool so you can select the width of the pencil stroke, which is great.  The finest settings allowed me to add patterns to the image.  This is something that sets the app apart from others I’ve seen, which only allow a flood fill.

The finer lines and the ability to zoom in to the area you’re colouring mean you can get into the tiniest areas to colour, which at the original image size may have been a challenge, especially when printed on paper and coloured using coloured pencils.

The line isn’t a solid line, it has texture to it just as if you’re colouring on paper with a ‘tooth’ (texture).  This means that optical mixing of colours is possible, as well as adding texture to that mixing.  It also means that a smooth blend of colours is achievable.

The colours lay nicely on top of each other, thanks to that bitty texture; one colour doesn’t obsure the other, unless you use a lot of pressure and it’s what you want.

Oh, the colours don’t obscure the black outlines of the colouring page, no matter how hard you press.

I am really impressed with the results and how the pencil tool works.

Also, I can get a bit irritated when I’m colouring with physical pencils; they often make my arthritic joints ache.  No such problem here; indeed, I wanted to carry on colouring but had to put it aside so I could get on with other things.

It works!  However, I preferred to use the white from the palette to erase small areas to add highlights as I could control the thickness of the line being used to remove colour.

The undo button would be really useful too.

Together, they are things you can’t do when you’re colouring on paper, well not easily.

I like this app, very, very much.  I found it easy to use, quick to master, and it gives really lovely results.  It’s a well thought through app, it does what it says it does, and the experience and results are a lot like using coloured pencils on paper!

I just want to repeat that although I have done some artwork for the app, these views are my own and not influenced by me working for them; if hadn’t htought the app was a good product I wouldn’t have agreed to do work for them!

Between a couple of ‘meh’ days, busy days with appointments, I’ve managed to colour this particular illustration of mine.

I coloured this one using copics, and the scan has washed some colours out.

What can I say...drunken party skulls, mushrooms and tentacles. Start of an illustration around a Tim Burton quote.
#DrawWithMe | Patterned Letters "h" | #handlettering #zentangleinspiredart #letteringsketchbook #letteringpractice #pendrawing
Some quiet time practicing #handelettering and continuing with my alphabet.
My #sundayart #letteringpractice #letteringsketchbook #pendrawing #zentangle #zentangleinspiredart #abstractart
A small #zentangle inspired drawing was just what I needed to do this morning. Adding delicate colour and shadow with #Inktense went with the distressed background
I had a lot of fun creating this panel this morning.
Loading Comments...
%d bloggers like this: