It’s been a long half-term at school; eight weeks to be precise.  In that time there’s been two training days, a twilight training session. a memorial walk to raise money for school funds and the Senghenydd Mining Disaster Memorial, almost daily incidents of poor behaviour/attitude to deal with, lessons observations, book reviews (as in how well and regularly work is being marked), a consultation with my union representative, a stress-meltdown and hopefully the end of three year period of what feels like persecution/bullying in a particular situation at work (culminating in the union consultation and the stress meltdown).

I still have a pupil to be dealt with who has been making threats to physically attack me because I apparently ‘start on him’ by asking him to do his work.  How shocking is that, that I should request he stop shouting around the class, distracting others and to do his work?

Oh the joys of being a teacher.

Having said that, there are joys.  The shared smiles and laughter with pupils enjoying the lessons.  The ones whose faces light up when they see me and who never exhibit poor behaviour in my class, even though they may do in other lessons), the shared laughter with colleagues, morning breakfast with ‘the girls’, the helpfulness of the lab tech, the enthusiasm and questioning of pupils because they are interested in something, their kindness and thoughtfulness.  And so much more that it’s a shame it can become dominated by the negative things that occur and dominate my ruminating, over-analysing, over-thinking brain.

It’s been really busy for me with having to prepare work for a new course I’m running with my special needs classes, as well as teaching mainstream classes that I’ve not done for years.  It’s meant late nights at work and even bringing work home – something I avoid doing as I do not want to go down the route of being a workaholic as I was in the first decade or so of my teaching career.

This busy-ness has really eaten into my creative time.  Little art has been done, and I’m am doing my best to settle back into it in this half-term, especially as I have two contracts to create artwork for two books, though I have been waiting for direction for what the artwork is to be for a long while now.

I’ve barely stopped in the first four day so of the half-term.  I seem to be running away from time with myself.  I can struggle with being alone, feeling lonely and end up keeping moving, moving, moving to avoid it.  Today I am remaining at home and trying to get things out of the way so that I will settle to some arty pursuits, or de-stressing after the last half-term.

I do seem to be a lot more resilient than I was a year ago.  Though things can get to me (such as loneliness, lack of a sense of belonging, the constant worry I’m doing things wrong that have precipitated the situation at work that led to a stress-meltdown), I often find there’s a content ‘centre’ in me that I can access when I do things of a creative nature or things that focus my mind away from it’s rumination and negative thinking.  It’s a little easier to spot when this is happening, though I don’t always catch it in time to stop the tears, the self-loathing and the comfort eating.

I rejoined a choir I’ve been a member of since I was in school myself.  Sadly, I had to leave again once the stress levels rose as my voice was, and still is, affected by the stress.

Out of all of this, and at odd times during the last couple of months, I have managed to do some arty things.  Here’s two mandalas of mine. 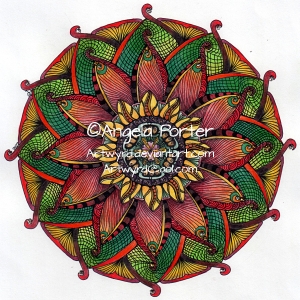 Rotring Rapidograph pens with black in on white cartridge paper. 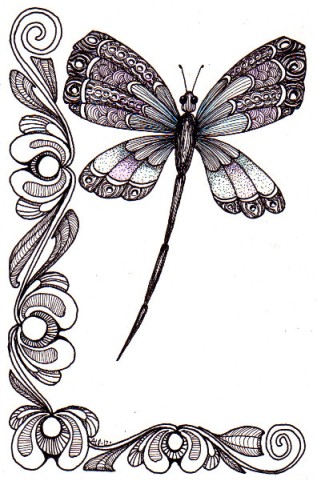 The last several days have been ‘faffy’ days where I’ve just been faffing around with art and reading and not much else.

The weather has mostly been very wet – torrential rain, high winds at time.  Perfect weather for battening down the hatches and losing oneself in art and craft and reading.

For some reason the drawing pens have come out again, and I find myself lost in the fiddly fussy work that I do, enjoying it too.  It also has shown me how I struggle with colour, unless the colour is purely abstract in itself.

It also allows me an escape from the sting of rejection, the loss of a dream that never ever was, and a chance to let my unconscious mind, my soul, my spirit to start the process of healing and working the way to the person I am meant to be, choose to be, want to be, with a life I’d like.  A life that includes people in it – friends, a found family, and love too. 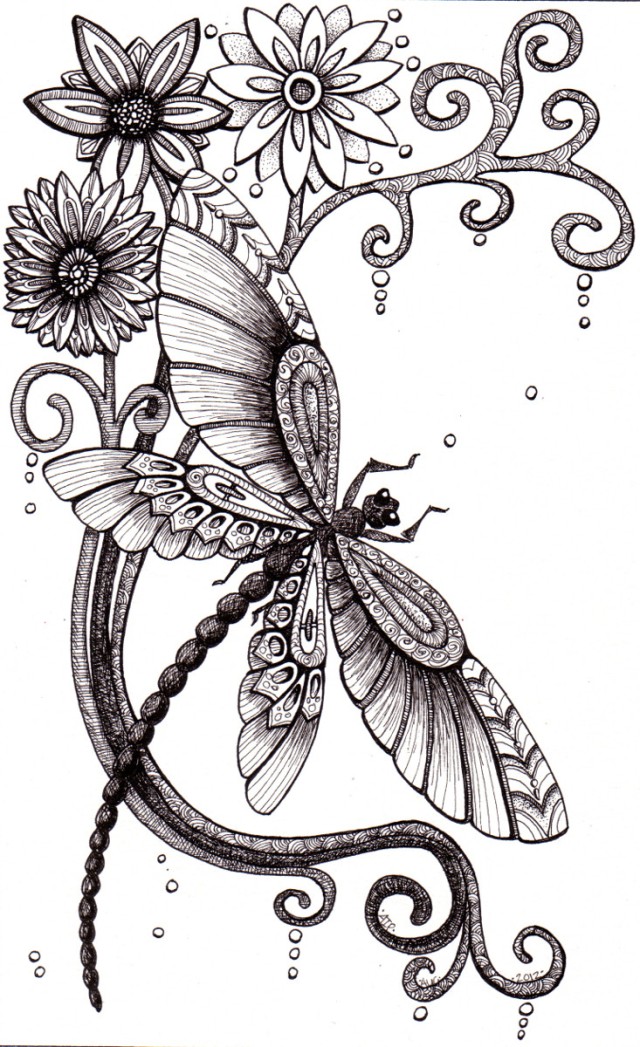 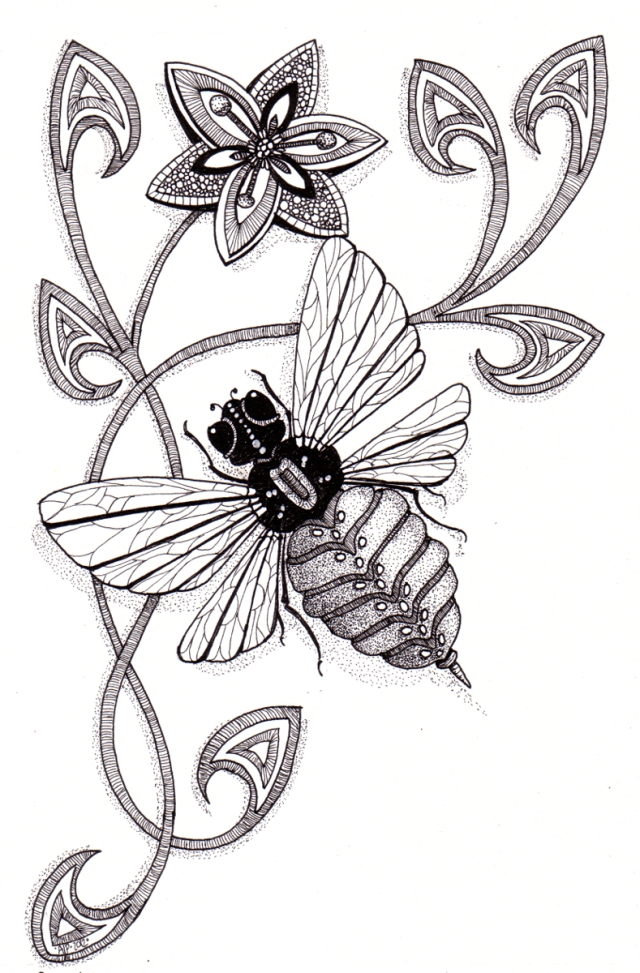 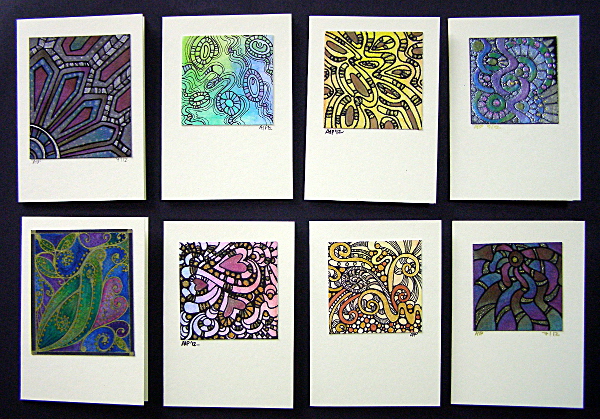 I’ve been doing teeny-tiny bits of art to turn into greetings cards.  Each card is 4″ x 3″ and the artwork is created using a variety of different media, including metallic pencils, coloured pencils, metallic and iridescent paints, metallic and glitter gel pens, Sakura glaze pens and fine-point technical drawing pens with black ink.

I’ve really enjoyed creating these; they’re relatively quick for me to create, though each one takes anywhere from 30 minutes to 90 minutes to create, believe it or not!  It’s also nice to create little bits of art that are more affordable.  Perfect for framing after receipt of them as a keepsake.

My swirly, curvy, spiralling style of abstract art is very much featured in these little creations, as is my love of colour.  The inner raven has been kept happy by the use of metallic, iridescent, shimmering colours and highlights.

All the cards are for sale on Etsy.

I’m going to be creating more this afternoon I think. 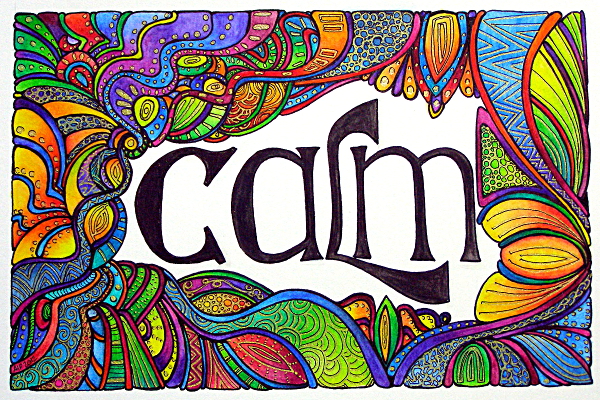 Spirals and swirls make an appearance again … this time symbolising the rather spiral paths I’m finding I’m travelling as I work to unravel and heal the wounds of the heart from the past.  The colours are rather warm, earthy, and that is a good thing I think.

Acrylic inks, technical drawing pens and a few dots of metallic gold ink…but not too many.

As I’ve been working on this today, I realised that it represents how years and years of anger and frustration have been trapped within me, thanks to my childhood upbringing and later life.  I’m learning about emotions at my more mature age, having suppressed them for so long in order to, basically, survive.

Even though the structure seems very ordered and controlled, that is how it always has been for me.  May the gods forbid that I should show a coarse or ugly display of temper or emotion!

There are cracks there though … and gradually (or not so if the emotional outbursts of the last couple of days are anything to go by) they will be released and healing can properly begin.

It’ll be worth it as I gradually become the person I’m supposed to be, rather than the one that was forced into the wrong sized, shaped and textured hole as a child, young adult, and beyond …