It’s that time of the week once again – Template Thursday!

Each week during the pandemic, I’ve created a colouring template for members of the Angela Porter’s Coloring Book Fans facebook group.

I got lost in colouring this template this morning. It was fun to use different styles of digital brushes and colour combinations in this one. Sometimes it’s just nice to do art with no expectations other than enjoyment, relaxation and comfort.

I drew the template with a Pentel 07 Energel pen on Rhodia dot grid paper. I scanned it in to the Surface Studio and cleaned the image up digitally. Then, I partially coloured it digitally in Autodesk Sketchbook Pro, adding a background texture that isn’t present in the downloadable image.

Last night, there was the most amazing lightning storm I think I’ve ever seen. It lasted for more than an hour and there were multiple flashes of lighting most minutes. I really need to learn how to use my camera to take photos of lightning – natures very own fireworks.

Sadly, I haven’t been able to see the Perseid meteor shower this year, and I missed the Neowise comet too. I have seen amazing photos of both, though, and of course the lightning storms of the past few days that have coruscated over the UK.

It’s a little cooler in the house today thanks to the clouds shrouding the sun. It’s humid though as the couple of brief showers last night have been evaporating slowly.

The heat meant I didn’t sleep well again last night. But, waking early meant I had plenty of time to edit the coloring template and add colour to a section of it.

I’m not sure if it’s cool enough to take a walk this afternoon. There seems to be a bit of a breeze picking up from time to time. I really don’t do well in the heat; I wilt very quickly. But I’ll see once I shower what it’s like outside.

After the emotions surrounding Remembrance Day and all the heart-tugging posts on social media concerning issues around veterans and families and so on, I needed to create something that was a little fun.

I drew the design yesterday and I’ve spent the past 4 hours colouring it using my set of Chameleon Color Tones and Color Tops.

Not digital art this time, just some fun doodleworlds style critters and monsters and objects, along with some geometric designs as well as my trademark arches and swirls and spirals.

I love how all my critters are different and yet close together getting along, even if some of them look a bit grumpy, fierce or angry. We all have emotions, a whole range of them from ecstatic, happy to sad, angry, miserable. It’s like a weird kind of family, friendship photo. Even the single kitty to the left of the tower is part of this group, even though it’s keeping its distance.

Sometimes I need that distance from people, even groups of people I care for. I get overwhelmed so easily. I then need some quiet alone time and space to rest, recoup and recharge. I enjoy time with people I care about; the trade off is feeling drained and tired and exhausted afterwards.

It’s the same with overly emotional days. When I need to rest, recoup and recharge sometimes drawing overly whimsical, cute, simple designs with cheesily cute critters and monsters helps to soothe what’s going on inside me.

I really need a bit of that before I head out for EMDR therapy later on today. 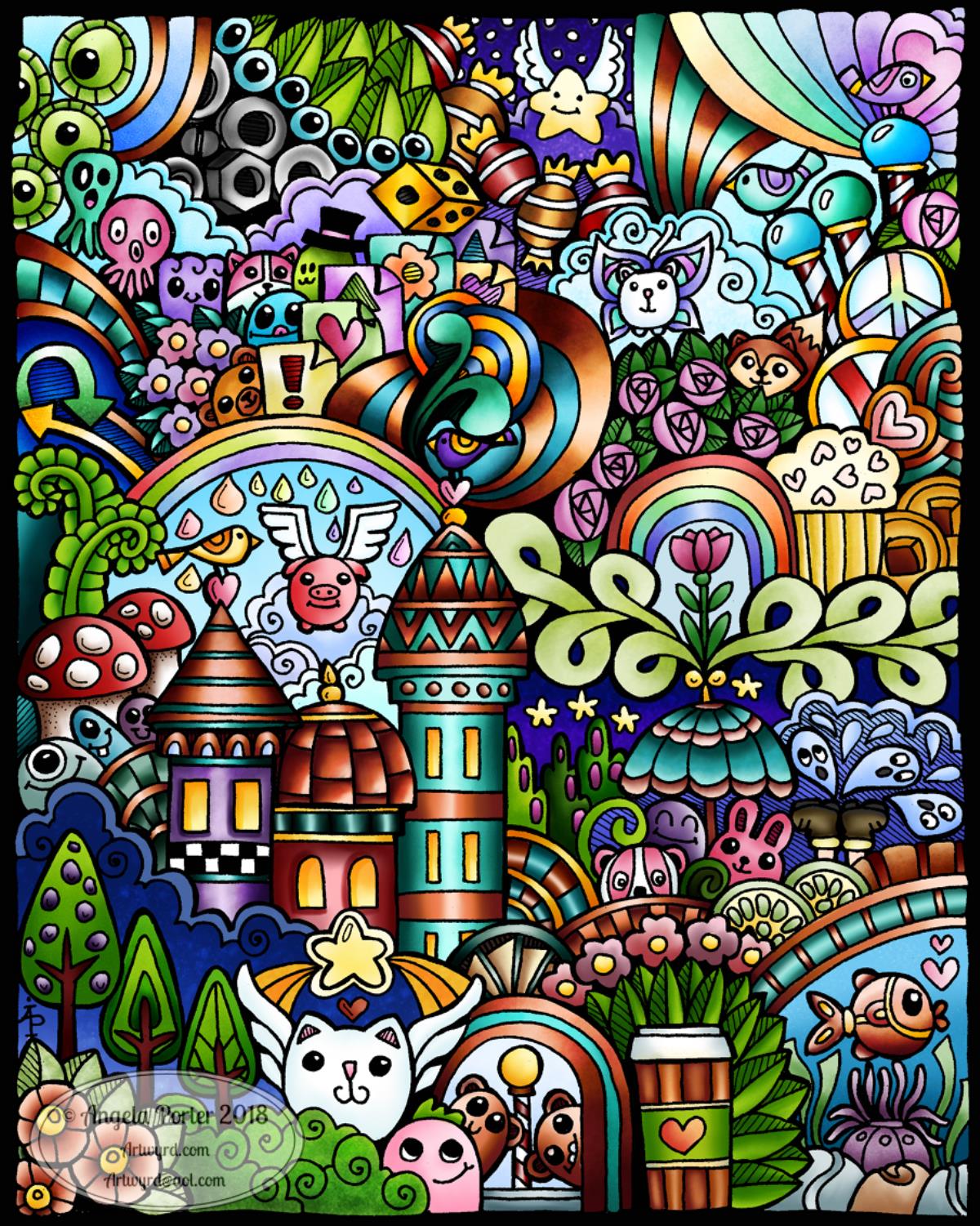 Doodleworlds is available on Amazon and in my Etsy shop – Artwyrd.

This is the finished Doodleworlds template that was started a couple or so days ago.

I needed a quiet day or two and colouring seemed to be the way to go, and it gave me a chance to work more with Autodesk Sketchbook Pro and my Microsoft Surface Pen and Surface Book.

It’s WIP (work in progress) Wednesday over in the Angela Porter Coloring Books Fans facebook group.  This is one of my current ones.  It’s from my Doodleworlds book, available on Amazon, and a pdf version is available from my Etsy shop, Artwyrd.

I’ve been laid a tad low with some kind of cold, and I’m still not right today; it’s been  a week or so now.  So, my arty output has been curtailed somewhat, but it’s beginning to ramp up a tad now.

Colouring done using my Surface Pen using Autodesk Sketchbook Pro on my Microsoft Surface Book.  I’m using various brushes for the design elements, but have used a gradient fill for the skies.

That’s right, Doodleworlds, the colouring book, is now available on Amazon.com as well as the other Amazon websites, so now all the lovely, wonderful colourists who love my work can join in with the fun of this book! 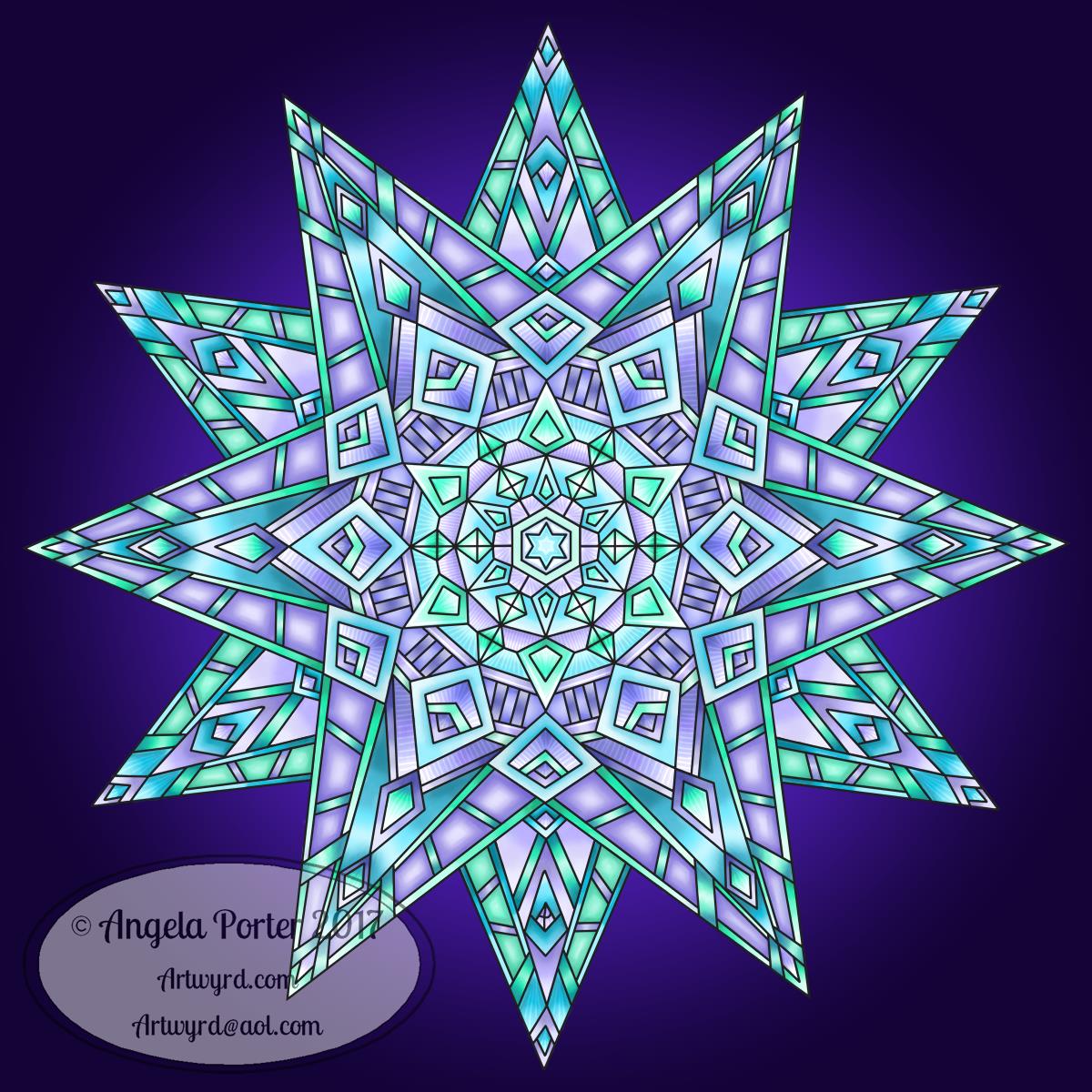 This month, the challenge for the members of the facebook group Angela Porter’s Coloring Book Fans is a little different.  I’ve set them a challenge to use limited palettes of winter or Christmas or holiday colours to colour in any template they wish and to share their results.  I’m hoping for lots of sparkle and shine!

The image above is my offering today for the group, the template I created exclusively for them, so if you’d like to get it and colour it, head over to Angela Porter’s Coloring Book Fans and sign up.  You’ll be sure to get a warm welcome there!

I drew the design on my Microsoft Surface Book using my Surface Pen and Autodesk Sketchbook Pro.  I used the same tools to colour the image.

Just a reminder that the Doodleworlds colouring book is available via my Etsy shop, called Artwyrd, and on Amazon.co.uk, other European Amazon sites, but not on Amazon.com yet.

Doodleworlds is now available through Amazon.co.uk

For some reason it’s not quite there at Amazon.com; there are some third party sellers offering the book for purchase at around double the price I’ve set.  I trust the book will be live on Amazon.com in the next day or few.

In a shortwhile, a pdf version of the book is available via Etsy – perfect for colorists who love to print on paper or other substrates that is suitable for their favourite medium.

It contains 40 whimsical, fun, details coloring templates, where the creatures that inhabit the Doodleworlds journey through different landscapes.  It is quintessentially Angela in style, quite intricate, busy, but cute and a little different to my previous books.

Anyone of any age who enjoys colouring in the more detailed designs will love this.  Also, the imaginative and ‘doodly’ nature of the artwork means you can let yourself go and just have fun with colour!

There is a facebook fan group – Angela Porter’s Coloring Book Fans – which you can join and share your coloured work with other colorists who love my work.

Of course, you can also share your work directly with me via my facebook page – Angela Porter Illustrator, or on Instagram where you can tag me as AngelaPorterIllustrator.

I’d love to see how you bring the denizens and realms of the Doodleworlds to life with colour.

First work in progress (WIP) for this Wednesday is the Doodleworlds colouring book.  It is currently in the last phases of approval and proofing at CreateSpace.com, so it should be ready to purchase soon!  There will be a pdf version available on Etsy at the same time.

The coloured cover art on the front and back covers has been done by the winners of the contest run in the facebook group Angela Porter’s Coloring Book Fans.

Here’s the back cover with the list of winners and their images on the covers:

Congratulations to them, and thank you for your work as well!

WIP Wednesday is a weekly event in the Angela Porter’s Coloring Book Fans facebook group, so pop on over if you’d like to join a whole heap of lovely, creative, friendly coloring fans!

And here is my contribution to this week’s WIP Wednesday: 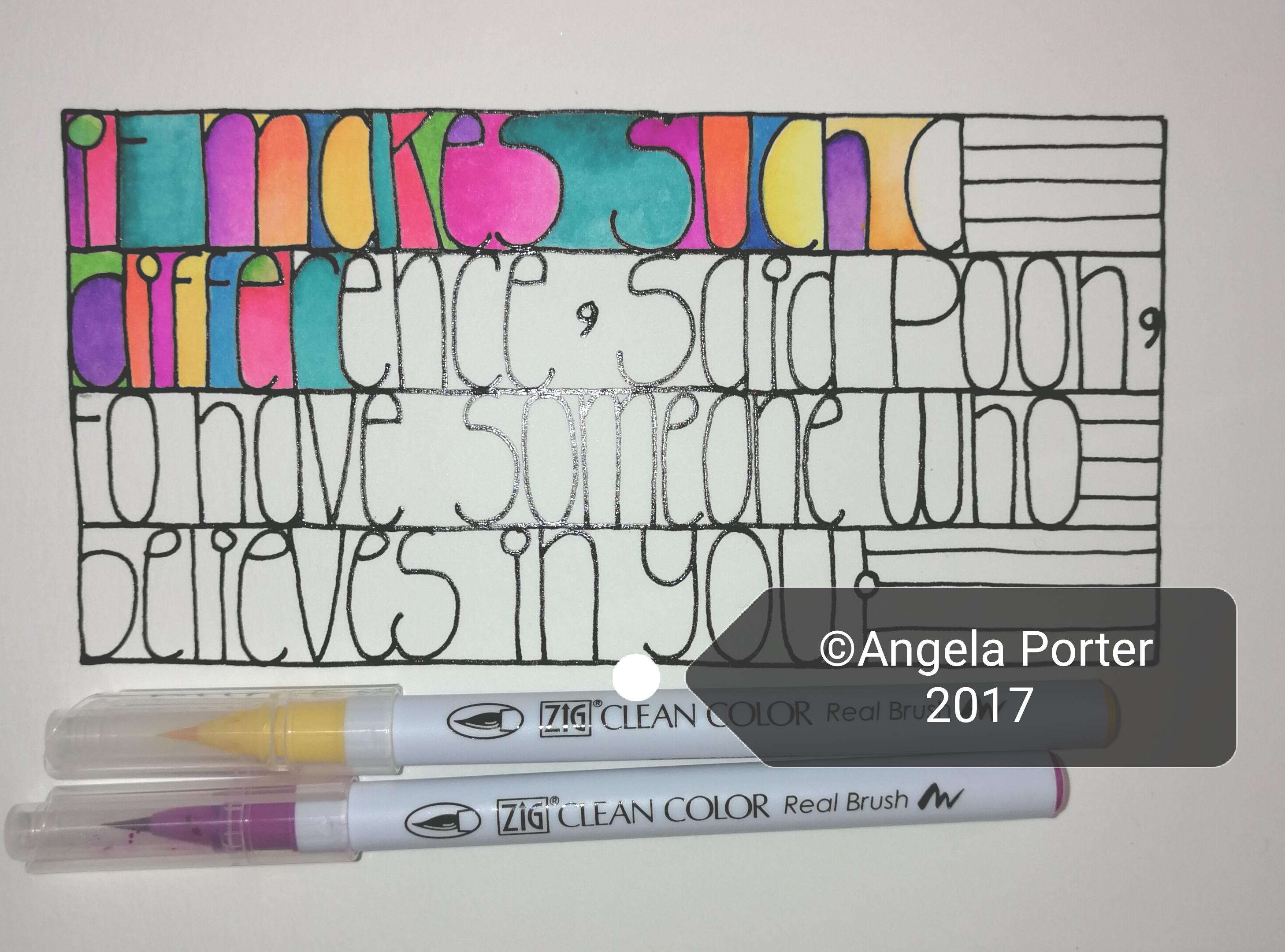 New Book and a Competition!

I’ve spent time working on a few more DoodleWorlds colouring templates for a book I’m going to self-publish, most probably in November 2017.

I’ve gone ‘old school’ on these – pen and paper – simply because drawing on the screen was starting to irritate me just a bit.  Also, a change is as good as a rest for sure!

The coloured artwork on the covers is going to be provided by the winners of a competition running on both the facebook group Angela Porter’s Coloring Book Fans and the Colorist app.

So, if you fancy having a go at colouring in the template to be found in either the facebook group on on the Colorist app, then head on over there – closing date is midnight on Hallowe’en.

Here’s a sneaky peek at one of the new templates for the book.  I used my Chameleon Pens to colour this one in.

Although I didn’t do anything in particular on Tuesday 10th October 2017 for World Mental Health Day (other than re-tweet and re-post relevant articles that is), I did do an anti-stigma talk on Thursday 12th October 2017.

I delivered my talk and story to a group of front-line police officers who were receiving training. It seemed to go well and be received well.  I’ve not read the feedback forms though, nor am I likely to, as even if 99% of them are positive, the 1% that may not be all the positive or says I made no change is the one that I’ll focus on and will end up worrying and fretting and being hard on myself…

What did surprise me was how anxious I was when I woke and on my way to, during and after my talk, far more than I’ve been before.

I’d almost forgotten what it’s like to be like that, or that was how I lived every day of my life for many, many years while I was still a teacher.

Well, not quite like that – it was worse back then, a lot worse!

Echoes of it reminds me of how far I’ve come, how much better I am now.

Of course, after the talk and driving and getting home, I had the post-anxiety ‘crash’ where I felt shaky, wobbly, my eyesight was still very acute, and a headachy tiredness grew.

A huge mug of tea, a couple of Jaffa Cakes, and an afternoon sleep with cat cuddles saw me a bit better in the evening, but I was still emotionally drained.  So, I too it easy, ordered a take-away, though I didn’t have much of an appetite.

Friday I was still a little wobbly, but today I feel more like myself again.

Art always helps me calm and ground, so that has been my therapy, and will continue to be so I’m sure.